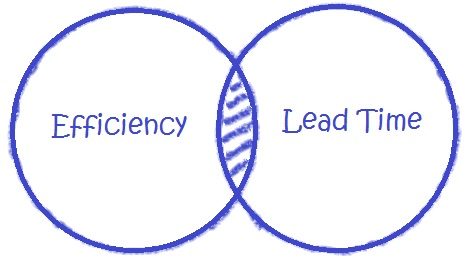 It’s Complicated: The Relationship between Efficiency and Lead Time

Written by Mike Gonser on December 11, 2019. Posted in Inside Dowding.

In any relationship there is give and take. In manufacturing the struggle is real between efficiency and lead time. Balancing demands of demanding customers with bottom line business expectations is no easy feat. Here’s one tool we found incredibly useful.

Efficiency has long been a measure of how well a business performs to its plan. Any idea or new way of making something better than the plan is good, any challenge that keeps a process from meeting its mark is bad. We’ve been conditioned to try and do our tasks better than before. Any activity seen as wasteful should be thrown out with yesterday’s garbage. Most of us have a natural go-to move to accomplish this, and it’s called batching. When we knock out a stack of paperwork, we feel efficient. When we bake up dozens upon dozens of cookies because we got the mixer down from the cupboard and the oven preheated, we’re batching.

Batching comes at a price though. And in today’s environment where there’s a need for convenience and speed, it’s a hefty one. Batching makes everything take longer, and so when we’re trying to respond in a timely matter, yet do so efficiently, well, it’s complicated.

In 2016, we at Dowding Industries got to know this struggle well when we were fortunate enough to have been awarded a sizeable contract to manufacture engine spacer plates from a large OEM. The plate required machining iron castings through several steps by removing metal until it reached the desired shape. It also had to be put through a process where material is removed from two opposite sides at the same time known as double disk grinding. It took several months for the grinding wheels to be dialed in to their most efficient state. The tolerances needed to produce good parts are very tight for this plate. Considering a human hair is about 50 microns, holding two microns across a foot squared part is no small task!

As the product began to be mass-produced we began to conquer the efficiency learning curve. We were in the “honeymoon phase,” if you will, and enjoying the benefits of the sizeable contract. But, as we all know, the new loving glow fades away sooner or later. For us, this came in the form of the customer increasing orders by 50%. Unfortunately, we were not prepared for this. How could we keep up? The extra orders used up all our slack capacity. Soon after, orders began to go past due and the production teams were working excessive overtime to try to keep up. We could not respond quickly enough to customer changes and so our lead time was too long. Tempers were flaring and burnout reared its ugly head. Our first fight wasn’t going to doom this relationship. We had to work things through. Something had to change and fast!

Now this wasn’t our first rodeo either, and we knew from our time with The QRM Center that there are multiple ways to open up capacity in a process. There is only one, however, that doesn’t require investment in more equipment and reduces our lead time. When we tracked the progress of the plate production we realized the lead time was 7 days, however the total time it took to process a single part … 8 minutes. This part was actually being worked on .07% of the total lead time. When put that way, it becomes clear to see the biggest opportunity to reduce the lead time is to remove the time when the part is waiting. Waiting to be run at a machine, waiting after it’s done for the other parts in its batch run in the machine, waiting to get moved to another machine, waiting for days, literally.

After assembling a cross functional team assigned to tackling this challenge, we hit the production floor to put boots on the ground and open up dialogue with machine operators. They helped us discover the problem area, or the bottleneck – in this case, it was the double disk grind operation. The operators, in the name of efficiency, were trying to run as many parts through as possible per wheel dressing, (think cleaning off your cutting board). The batch sizes were around 200 plates at a time, and because of this, large piles of parts were sitting around waiting.

We decided to cut the batch in half and run through 100 plates at a time before dressing the wheel. Initially operators weren’t thrilled with extra dressing, but after explaining the big picture they understood how their quest for efficiency and our lead time to customer were at odds with each other, and to their amazement, the part quality actually improved. We used 2% less tolerance in the acceptable range. With batch sizes cut in half there were less plates sitting around waiting and lead time dropped to 4 days. Hooked on this new mindset of improvement, our team wanted to cut the batch again, and finally settled on 50 plates at a time. With the smaller batch, plates could flow from machine to machine without waiting and ultimately the lead time dropped for a single plate to under 2 days! To help sustain this change and make life easier for the operator we had carts built for transferring plates between machines that only held 50 plates.

Where you focus matters

So often we’re zeroed in on efficiency gains that we don’t realize the trouble we may be causing in another area of our lives. When we narrow our scope too far we generally drive more losses than gains, and we miss out on other opportunities. What we’ve found is if we focus on improving the lead time through eliminating the waiting time, we generally find some efficiency and other improvements along the way. This lets us find harmony in that sweet spot where efficiency and lead time intersect.